Veliaj addresses the residents of "5 May": 100% compensation for the property, the noisy minority can not block the progress of the city 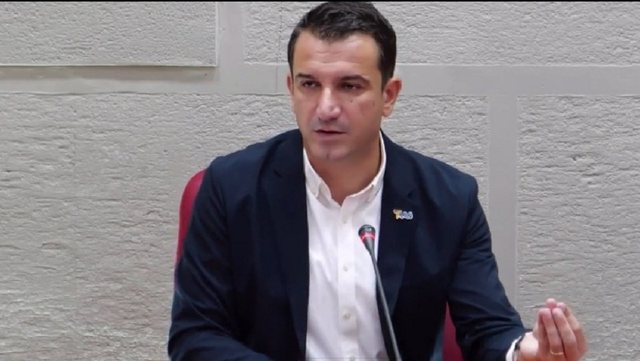 The Mayor of Tirana, Erion Veliaj, assures all those affected by the process of reconstruction of new neighborhoods in the area of ??"5 May", that they will receive full compensation without losing a single square meter of their property. During a meeting with representatives of taxi service companies in Tirana, Veliaj said that no one can block the progress of the city by threatening.

"Everyone is getting the same square meters. You occupied 450 meters without permission, you will get 450 meters, but now urbanized, with permission, by the architect Stefano Boeri. There is nothing fairer than that. As this happens, despite the fact that you came to the river and not the river to you, you will receive the rent bonus. All of a sudden, all the media was dealing with two criminals yesterday and they were saying how are you going to kill the mayor? With cane or with acid? First of all, I'm the last to eat these conversations. Those who shout the loudest are not strong. They are in the minority with 99% others who pay taxes, they do not fall for the man anymore, they do not block the progress of the city. "Exactly, they shout to remove the fear from themselves, that they are cowards and the minority", said Veliaj.

The mayor said that all those who will be affected by the reconstruction, will also receive a rent bonus until they receive the keys to the new housing in hand. Two people listed as "usury sharks", from whom OFL seized 18 cars and 5 million euros in assets, said: Where will I stay for rent? The rent will be paid by the municipality, you just do not use your political party, to hinder the investments of the municipality ", he declared.

Veliaj added that what happened in Astir is a clear indication that at the end of the project, residents will be more successful. "If we all say that traffic should be freed, where will these roads go? In Astiri, 3 years of hassle, they took the money for beauty, they were expropriated and they did better. We expropriated some carbines, which were not home. "In a normal situation, to occupy and be on the side of the road and get the market price for something that was a carcass, this has not happened in any country," he underlined.

Residents affected by the construction of the new neighborhood in the area of ??"5 May" will be 100% compensated for their property. Based on the decision approved by the government, it is ensured that all residents affected by this project will receive full compensation, through the exchange of their property with the facilities that will be built in the new neighborhood.

Children visit the new Zoo shortly before the official opening

Macrobiotic diet and the health benefits it brings

Civil society protests in front of parliament over the draft law on Butrint National Park.

Saga of the President / Without any candidate, the meeting of the Law Commission lasts only 3 minutes

The week starts warm. Temperatures up to 32 degrees

Horoscope for May 23 by Russell Grant

'I'm his bonus mother and not the stepmother'. How Gisele Bundchen coined the new term to describe her relationship with her husband's son

Without nice words, celebrities show the hard side of being a mother

Luana, Arbana, Beatrix and the cause that unites them

In the new clip, Eni Koçi and Genc Prelvukaj reveal the gender of the baby they are expecting, maybe even the name

A bag, suggestion by Gwyneth Paltrow

The saga of the president / Opposition does not submit any name, the Second Round is burning

How do 10 celebrities look with their natural hair

Rare interview of Olena Zelenska: No one can take my husband, not even the war

Biden tops the list of Americans banned in Russia, but Trump is not on it

Zodiac signs that do not know how to keep promises

Summer season / Kumbaro inspection in Dhërmi: Businesses are clear for beach plots, informality will not be forgiven!

Biden: The increase in cases of monkey pox is troubling

Ways to bring nature into your home through decor

The line of monkeys is spreading all over the world. Is there danger?

What foods strengthen the immune system?

Immigrant advice from a lawyer: How to get a family reunification visa in Germany

Temperatures up to 32 degrees today

Horoscope for May 22 by Russell Grant

AADF head Granoff: No hotel or commercial building will be built in Butrint

Laugh often and help others! This is the secret of happiness

It's expensive jet summer, for Europe fares have doubled

The best are on the way!

By Mira Kazhani / Elton Balla is neither famous nor perhaps fashionable. It i...

But what exactly is marriage ?!

Macrobiotic diet and the health benefits it brings

'I'm his bonus mother and not the stepmother'. How Gisele Bundchen coined the new term to describe her relationship with her husband's son

Without nice words, celebrities show the hard side of being a mother

In the new clip, Eni Koçi and Genc Prelvukaj reveal the gender of the baby they are expecting, maybe even the name

Horoscope for May 23 by Russell Grant