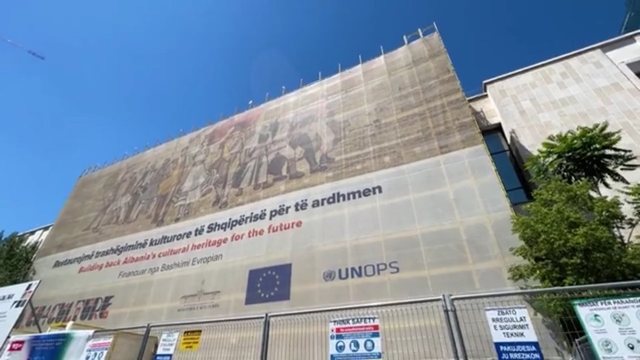 The Prime Minister Edi Rama and the President of the European Council Charles Michel continued the agenda of this day with a visit to the National Historical Museum, to see the progress of the restoration of the "Albania" Mosaic, the largest of its kind in Albania. The mosaic, built in 1981, the work of a group of Albanian artists, is being restored under the EU 4 Culture program, UNOPS in cooperation with the Ministry of Culture.

"Today, then I will go to your national historical museum and see the work that is going on at Mosaic. The Restoration of the Mosaic is a powerful symbol of the strong and great heritage of Albania and after the earthquake you mentioned, we told you that you can count on us to support you further and we are continuing our work more than ever. The European Union managed to raise all those funds as never before for infrastructure and you can be sure that you will be able to continue to rely on us, "said before this visit, during the joint press conference with Prime Minister Rama, the President of European Council Charles Michel.

The Minister of Culture Elva Margariti spoke about the Mosaic restoration project, the implementation of which extends even wider than the facade where it is located.

"The National Historical Museum is one of the most visited museums in Albania. Before the pandemic we had more than 100 thousand visitors a year. We aim to have much more with the implementation of the restoration of this building. It was one of the most damaged objects by the earthquake and with the EU funding we started with the restoration of the Mosaic, "said the Minister of Culture Elva Margariti, while emphasizing that the support received through the Eu4Culture program is among the most generous funding to help heritage cultural.

"The mosaic, one of the most important works, is being restored to the most damaged parts. This is the first facility we launched with the EU4 Culture program. It is the most generous support we have had after the earthquake for cultural heritage, more than 40 million euros for about 30 objects, areas that will be rebuilt. We are also working on the implementation of the complete restoration of the entire museum because since 1981 nothing has changed, except for a few minor repairs, also the Ministry of Culture has tried for this. Here we have all the dedicated staff of UNOPS, foreigners and Albanians. UNOP is the executive agency for the implementation of EU 4 Culture. It is a new reality for them because they have never worked with cultural projects.

We have transformed Skanderbeg Square. All the greenery that is placed around here, is specially designed. The green vegetation fence did not exist before. The square has a slope that we rebuilt because it was different before. "Traffic and the movement of vehicles have been reoriented, the concept has completely changed," said the Prime Minister.

'Thank you from the heart', the message that some Albanians left on the windshield of the car of the tourist from Serbia

Governor of the Bank of Albania: The highest level of inflation is expected in the third quarter

The countries with the highest risk from Covid-19

Inside the suitcase that Nicola Peltz took on her honeymoon

Salaries for teachers and doctors are increased by 6%

Rama for the Dutch newspaper: the EU has lost two crises without taking a single step forward, the war is the third chance

"My Artisan Tradition", the special mission that started the journey in Albania

The increase in Covid cases, the Committee of Experts is meeting today. What is expected to happen

The price of fuel is reduced

Sweden and Finland one step away from NATO

Temperatures drop by a few degrees, but it's still hot

The 76-year-old grandfather, who saved his family and himself was killed by gunfire in the 4th of July parade

Erion Braçe, even with a legal initiative to protect farmers, wants to give the status of commercial companies

The most common female name in Albania is Mimoza. Who ranks second and third

6 behaviors that men appreciate a lot in their partner

Rama: We are close to an important discovery of oil and gas underground

Veliaj: We will start the theater works in September

Whatsapp is making the dream change. No one will see whether you are online or not

3 reasons why every weekend should be long

Rama in the Netherlands: We have no problems with political stability! Protests happen because we are a country where everyone is a prime minister on their own

SP proposes changes to the Highway Code: license extension and new rule for the elderly

DP demands the resignation of Edi Rama for the Incinerators

The names of 20 candidates for the People's Advocate are published

The price of oil and gasoline increases again!

Another European country lifts all travel restrictions. No vaccine or PCR test is needed

Victoria Beckham burst in the face of 23 years of marriage, to those who did not believe in her and David's love