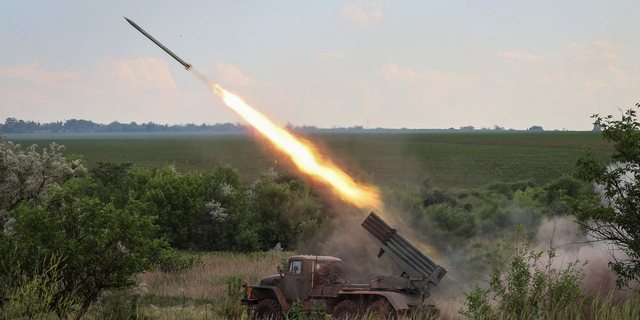 The New York Times reported that more than 40 rockets were used in the attacks, which the newspaper said were launched from Belarusian airspace just hours before a meeting between Russian President Vladimir Putin and Belarusian Alexander G. Lukashenko in St. Petersburg.

Meanwhile, Ukrainian troops announced that they were withdrawing from the eastern city of Sievierodonetsk after weeks of fierce fighting with Russian forces.

Luhansk regional governor Serhiy Haidai said the troops had been ordered to relocate to new positions.

Ukraine said Russian forces had completely occupied the neighboring town of Lysychansk which also lies in the eastern Luhansk region. Moscow claimed to have surrounded about 2,000 Ukrainian troops in the area.

The Kremlin is likely to take full control of Luhansk province, one of Moscow's declared targets.

To stabilize the situation in Luhansk, Ukraine needs weapons, said the highest Ukrainian general, his American counterpart on Friday.

"We discussed the operational situation and the flow of international technical assistance," Ukrainian General Valeriy Zaluzhniy wrote in the Telegram application after a phone call with General Mark Milley, the chief of the US General Staff.

Ukraine has said that Russia's advantage in artillery, on the Donbas front line, is costing Ukrainian troops dearly, so Kiev has called on Western partners to supply it with more weapons.

A senior US defense official on Friday praised Ukraine's decision to withdraw from Sievierodonetsku, calling it a "professional" and "tactical" move.

The official, speaking on condition of anonymity, said Russian forces had been able to advance around Sievierodonetsk, but at considerable cost, he added.

"The Russians have suffered many casualties and losses in heavy weapons," the official said. "Russian forces are showing signs of weakening consumption and morale, and this is affecting their ability to advance rapidly."

The United States pledged $ 450 million more in military aid to Ukraine this week, including other long-range missile systems, in addition to the $ 1 billion in aid announced about a week ago.

The top US defense official said Friday that Ukrainian forces are training with four other high-mobility artillery missile systems (HIMARS) as part of the newly announced package. American systems will be put to use in the war, within a few weeks.

Paris is flooded in a few minutes by the rain storm! Here are the images brought by the media

Noizy spoke on Euronews and again the topic turned to fights

How eating grapes can prevent dementia and increase life expectancy by 5 years?

The first case of monkeypox in animals is confirmed. Should we be worried?

Clear and cloudy! Get to know the weather for today

The Spirits of Isabel Allende

The fight against online propaganda

Rainwater everywhere on Earth is unsafe to drink, study finds

Are discussions with your partner turning into fights? Here's what you should do

The well-known actor of Albanian films, Pandi Siku, has passed away

These cities are the most expensive to live and work abroad

Temperature up to 34 degrees, here is the forecast for today's weather

Accident at Kodra e Diellit, the 29-year-old hit 3 passers-by on the sidewalk

The debate about headscarves in Kosovo, even Vjosa Osmani comes out against Kurti

Preparations for the Sunny Hill Festival stage in Tirana begin

Forte dei Marmi, one of the favorite destinations of Russian tycoons, has not felt the war in Ukraine at all

Which fruits are low in sugar?

Veliaj: We are opening the competition for the transformation of the Sports Palace "Asllan Rusi" and the stadium "Selman Stermasi"

3 Horoscope signs that are dominant in a love relationship

Edi Rama interview for the French media: We were the North Korea of ​​Europe

In Apulia, the newlyweds donate the excess food from the wedding banquet to the poor

An American mattress company is paying people to sleep

How eating grapes can prevent dementia and increase life expectancy by 5 years?

Noizy spoke on Euronews and again the topic turned to fights