Rama interview at the "De Balie" center in Amsterdam: Bulgaria is not the issue, it is the EU! 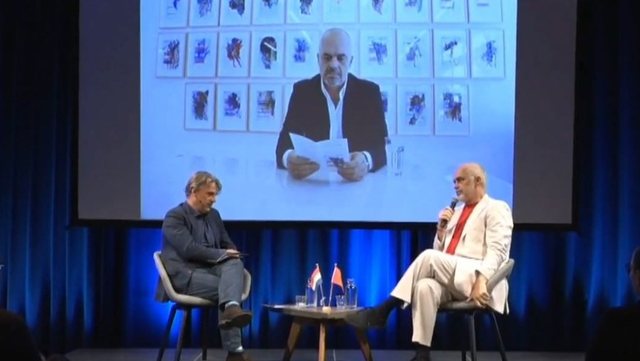 Prime Minister Edi Rama, who is in Amsterdam, in an almost two-hour conversation with Yoeri Albrecht, head of the well-known "De Balie" center, spoke about Albania's position in relation to the EU, as well as his views on the current situation. geopolitics in Europe.

Rama said that the situation of a Europe that is slow to move, especially when it comes to the Balkans, has recently been superimposed on historical problems that return to the politics of the day, postponing the opening of negotiations with Albania for several years now.

"If countries like Bulgaria use their EU membership and veto to discuss history on a political level, this is even more complicated. And I think every time history is taken over by politicians to solve, the result is that history becomes more complicated than it was before they took over. This is all a shame, related to the warped spirit of expansion. Bulgaria is not the issue, it is the EU! The way it works is outdated. It must be changed," said Rama.

The prime minister went even further into the history of the Balkans, not without jokes.

"If you enter the Balkans, it's crazy, because if you go there and ask the Albanians, we think we came with monkeys. We think Darwin's evolution started with us. The Greeks think Holland is an old village of Ancient Greece, they even think they came before the monkeys. If you ask us, Napoleon was Albanian, his family went to Corsica. These are things that should not be discussed at the European level," continued Rama.

He jokingly said that when that happens, - barring another lost year, - there will be no wedding.

"The most incomprehensible thing beyond this is that neither we nor North Macedonia are knocking on the door of the EU to become members. If we became a member today, I would understand. We just want to start the talks. I think that the negotiations should have been opened many years ago, maybe next year, but we will not lose sleep over this. We kept organizing weddings, big weddings with music. We were waiting for the bride to come from Brussels, but 1 year 2 years 3 years she never came. If he will come to marry us without music and immediately in bed and have children, let him come. I say it with humor, but imagine yourself when you want to get married seriously, but she never shows up", said Rama.

A day before his birthday, Rama said that he will celebrate it for the second time in the European chancelleries.

"One thing is certain, it will be an unforgettable birthday! Instead of being with my family at home, I will be alone with Mark Rutte. This is the second time I have a birthday like this. I was once with Angela Merkel in Elise and the whole Balkans was there and ended up singing me Happy Birthday. These are the good side effects of being a politician", said Rama.