Tirana Economic Forum / Veliaj: The goal of the city is to have 10 thousand coders in Tirana 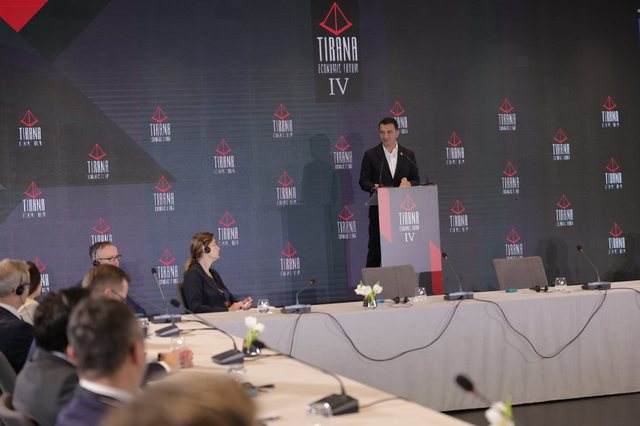 Digitalization and focus of young people on information technology were the points at which Mayor Erion Veliaj stopped today at the Economic Forum of Tirana. Describing this forum as a platform for dialogue between actors and factors of economic development, Veliaj added that thanks to investments in the capital, digital technology is gaining more and more importance, which is dictating not only the challenges of the future, but also a revolution aimed at once and for all separating the services age from the digital industry.

"In the 2000s we made a transition from what is called the fason industry, to that of services, mainly call-centers. While today, this is the moment to make another leap, from call-center to data-center and to the digital industry. In Tirana today we have about 4600 thousand coders. But, my ambition as mayor is to have 10 thousand coders at the end of this mandate. That is why we have liberalized the software engineering schools, encouraging them to come to Tirana "Hoxton Academy", "Holberton School", "Micro Folie", "TUMO Center", "Ecole 42" and "Factory Berlin". "The ambition is for 1% of our population to be professional coders because this is the job of the future, which you can also do from home, which does not require you to leave the country, but these are also the jobs that get paid better," he said. expresses Veliaj.

Given the fact that in Tirana this whole week is full of activities within the Europe Week, Veliaj brought to attention that the capital really aspires to EU membership, but first it is important to create Europe here.

"As a city, we are trying to build a piece of Europe here. To make sure that in every field, whether in education, employment, social services or mobility, we are as European as possible, so that Europe is not a destination to go to Brussels, but a destination here, between us. Not only here in Tirana and Albania, but all together as a region, we can be an extraordinary power. Separated courses, as Skanderbeg's famous story teaches us, can be a 'birch' that breaks easily. Together we are invincible! "If we have understood this lesson from our past, I believe we are ready for our future," Veliaj underlined.

Veliaj also spoke about the importance of regional cooperation, within the Open Balkans and good neighborliness. "I want this Forum to reflect a little on what a good neighbor means in 2022, at a time when a neighbor is waging war on another neighbor. In the Balkans, neighbors have learned that war weakens everyone, does not strengthen one and weakens the other. "We have learned from the mistakes of what happened in Bosnia and Kosovo, to return to a stronger region, which speaks of an Open Balkans, a new market and a labor market without borders," said Veliaj.

The Tirana Economic Forum is a high-level meeting of political, corporate and intellectual leaders with local and international influence, to address the urgent challenges currently facing Albania and the world.