Conference on tourism, Veliaj: No free rooms in Tirana on May 25. The hysteria about hotels is not serious 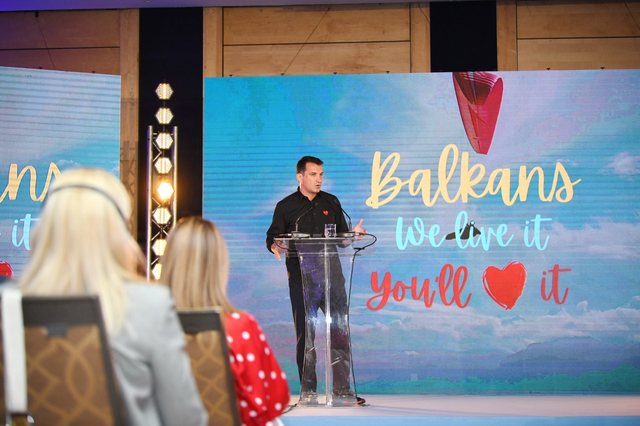 The Mayor of Tirana, Erion Veliaj, was present today at the Ministerial Conference of the Western Balkans, where the focus of the discussion was the improvement of the business climate for investments, especially in tourism, between the countries of the region, organized by the Regional Cooperation Council. In his speech, Veliaj said that Tirana is today one of the most interconnected cities in the Balkans, and as such is turning into a "city break" for the citizens of neighboring countries.

"Tirana today is the most connected city in the Balkans, with 105 flights a day. "Many of the colleagues from the region come to Tirana to connect with some parts of Europe, where our airport and the reduction of barriers, has made it extremely easy to connect at very affordable costs," said Veliaj. .

"In 2019, Tirana had more tourists than residents. "For a city that has no sea and is not, let's say, a classic city like Paris or Athens, so not a city with a history of thousands of years, this is a success because it has brought a kind of tourism called 'city-break'", declared ai.

He also stopped at the final of the Conference League, which will take place in Tirana on May 25. Veliaj stressed that due to the match the hotels have exceeded the accommodation capacities, so much so that today it is difficult to find a free place in the hotel. He jokingly said that due to this overload, the mayors of Rome and Rotterdam, who will come to Tirana to watch the match, "friends are coming in" to find a place in the hotel.

"I have a message for us who live in Tirana: We will either make hysteria or we will make history, because we can not do both. We can not shout 'what are these towers and oligarchs, and money laundering', if we do not have facts. If we have facts, we should definitely go to the prosecutor's office. But, here we are today, we arrived at the day that in Tirana there is no more room in hotels. So, if we want to be global players in this 'game', in this challenge, which Majlinda opened for the whole region, we will have to behave like serious people. If hysteria, jealousy, envy overwhelm us and we start calculating the other, we do not understand that a hotel like this, which is being built here, if it lies horizontally would occupy the whole "Mother Teresa"; if the hotel "Plaza" would be spread over 4-5 floors, it would occupy the entire square "Skënderbej". We have air, we do not have enough land,

Veliaj also underlined the fact that if we want to be a genuine tourist place, we must accept to have high hotels, able to afford activities such as the final of a European Cup.

"For us who live here it is very important to start behaving like adults and mature people, especially now that visas have been liberalized, especially now that we have seen the world with our own eyes. We make hysteria about every construction ... we forget that the boys and girls who work in the field of tourism are not for garnishes and photos, as much as to say "hate, here is the professional education". But where will they work? The hotel where we are today employs, starting from the guard who waited for you at the door, the taxis lined up outside, the ladies sweeping the floor, the plumbers, the electricians, the reception, the kitchen, the waiters, the bartenders, all the infrastructure that works here, are jobs and tourism is the economy. So if we want to be a tourist place, we will accept to have these high hotels and spaces to accommodate big activities. In a year like this, where Tirana has on average 10-12 such activities per day, we are required to become serious people, who have seen the world with their own eyes and who do not shout for anyone else. If someone is prevented from developing, he has the right to complain. "But as long as this market is liberalized, who has the right, who has the trust of the banks, who has the opportunity, who takes the risk to do business in tourism, will certainly be supported by 0 bureaucracies", said Veliaj.

The Western Balkans Ministerial Conference on "Removing Barriers to Sustainable Tourism Development" brought together Western Balkan line ministers, representatives from the European Commission and other stakeholders to discuss improving the business climate for investment. sustainable in tourism.

The Border Police rescue 4 people who were drowning in Shengjin, 3 of whom were minors

28 outbreaks in the last 24 hours, of which only 4 are active

The language that does not know the word 'No'

He was shot with a gun. The 50-year-old man from Fushë-Kruja passed away

Europe's drought could be the worst in 500 years. What are the most affected countries at the moment?

China: We will make efforts for peaceful unification with Taiwan, but the use of force is not ruled out

The anti-abortion law began to take effect. A woman is accused of helping a teenage girl have an abortion

New Whatsapp. Getting out of the annoying group without others realizing

The uncle killed the 12-year-old nephew with couples, the first details of the tragic event in Shkodër emerge

It's still raining in some areas today

Langya, the newest virus is circulating and has infected dozens of people in China

Shemsi Krasniqi and the buzz in the media about the Sunny Hill festival!

The responsibility of freedom

What happens to your body when you skip lunch?