Veliaj from the new school 'Bashkim Fino': We end the lesson with two shifts after 30 years The 9-year school "Bashkim Fino", which is being built near the Student City, will finally solve the problem of teaching with two shifts in Unit 2. This school is part of the package of 40 new schools that have been added or are being added to Tirana , which will open its doors at the start of the new school year in September.

The Mayor of Tirana, Erion Veliaj, inspected the works for the construction of the school and added that the new buildings will be ready in the summer, to open in September. He said that the focus will be on schools in the suburbs of the city, such as schools in the area of ??Fresk or "5 May". "Bashkim Fino" school will have 30 classes with 30 students each.

My invitation is to start thinking about how much time we spend with our children, taking them to the school "Kosova", "Osman Myderizi" or the school "Mihal Grameno". The moment we have a new school like this, with optimal learning conditions, with the best portal teachers, then there is no worry of bringing the child to learn here. We have good construction quality, but we have an extraordinary quality of teachers, "said Veliaj. 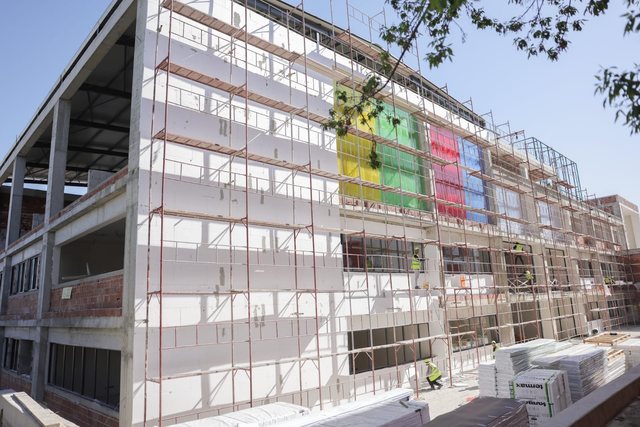 "There are still many things to do well in Tirana, but with the construction of schools we are extremely attentive. It's a success story! Today I have only gratitude for the staff who worked because it was a difficult time with the earthquake, the pandemic, and the crisis that is happening, but the fact that we have been focused and we are catching them in time for this summer, I say that in the elections next local we will have topics to talk about again, but one thing is for sure, we will not talk about two-shift schools anymore. This topic we have been talking about for 30 years has finally been resolved, and this package of 40 schools for Tirana is the best answer to all those who try to introduce politics everywhere. The opening of "Sami", the opening of "Bashkim Finos", the opening of the school "Kennedy" and "Mother Teresa" in Koder Kamza, the opening of the school "Kiço Blushi" at "5 Maji",

Veliaj underlined that the construction of new buildings provides sufficient heat, for maximum saving of electricity.

"In the context of increasing the price of energy, oil and material base, the special investments of the Municipality of Tirana are sustainable buildings. Almost every building of the Municipality of Tirana is with zero carbon, which means that it does not pollute the environment, they are equipped with a hood system, with the latest technologies, which lead the energy efficiency to the maximum. If the municipality itself builds in this way, ie with zero carbon emissions, with zero pollution, then everyone will have to adapt. We live in a time where the price of energy and the price of oil on the stock market do not depend on us. What depends on us are the decisions today. "If we have decisions today that the school is self-sufficient and has energy consumption to a minimum, it does not lose heating or cooling energy, it means that we are building the cities of the future," he underlined.

Bashkim Fino School will have a capacity of 1100 students, including 200 children in kindergarten, 6 laboratories, a library and 2 gyms.

The Border Police rescue 4 people who were drowning in Shengjin, 3 of whom were minors

28 outbreaks in the last 24 hours, of which only 4 are active

The language that does not know the word 'No'

He was shot with a gun. The 50-year-old man from Fushë-Kruja passed away

Europe's drought could be the worst in 500 years. What are the most affected countries at the moment?

China: We will make efforts for peaceful unification with Taiwan, but the use of force is not ruled out

The anti-abortion law began to take effect. A woman is accused of helping a teenage girl have an abortion

New Whatsapp. Getting out of the annoying group without others realizing

The uncle killed the 12-year-old nephew with couples, the first details of the tragic event in Shkodër emerge

It's still raining in some areas today

Langya, the newest virus is circulating and has infected dozens of people in China

Shemsi Krasniqi and the buzz in the media about the Sunny Hill festival!

The responsibility of freedom

What happens to your body when you skip lunch?