Why don't men have close friends? 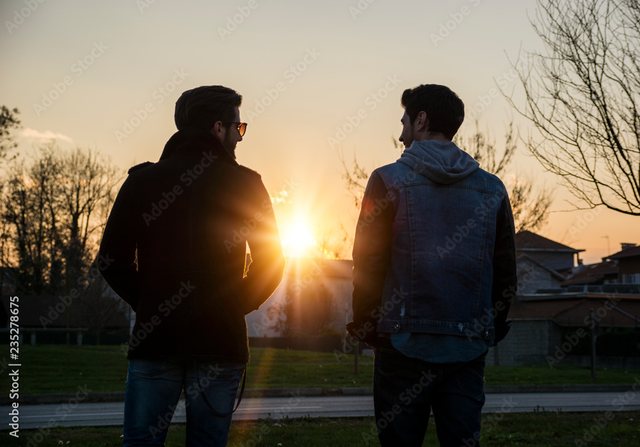 Friendships aren't just about who you sit with on the school bus or play with on your childhood baseball team — they're an essential component of the human experience, experts say.

But creating and maintaining deep and meaningful friendships as an adult is difficult, especially for men, according to research.

Fewer than half of men report being satisfied with their friendships, and only about 1 in 5 said they received emotional support from a friend in the past week, compared with 4 in 10 women, according to a 2021 survey by the Center of Surveys in America.

The decline in male friendships begins around mid- to late adolescence and becomes more pronounced in adulthood. And those who maintain friendships with other men say they tend to have lower levels of emotional intimacy than women report.

All humans have the innate capacity and desire for close, emotionally intimate connections with others. We need these relationships to survive as babies and then thrive as we grow up.

Research has shown that close friendships protect our mental and physical health. And men who prioritize those relationships are fighting one of the most damaging things to human health - loneliness.

Just as many men strive to eat right, exercise, succeed in their careers, and raise children, men should also prioritize developing friendships as adults.

Why is it so difficult?

When the researcher first began conducting research on male friendships in 1995, many participants assumed his survey was about homosexuality. Such stereotypes that male bonding would be, or would become, a sexual experience are incorrect, but they did reveal some of what can hold some men back from deep friendships.

Assumptions 27 years later may be different, but social pressures are what make it difficult for men to express the vulnerability and intimacy needed for close friendships.

We are all born with two sides of ourselves: the hard side that is stoic and independent and the soft side that is vulnerable and interdependent.

People greatly underestimate how much their old friends and acquaintances appreciate hearing from them.

The hard side has been characterized as masculine and inherently preferable, and the soft side has been seen as feminine and lesser.

Boys get messages that growing up and "fitting in" means giving up that soft side—a mindset that neuroscience, social science, and developmental psychology show is harmful to them.

If it's a female thing, it becomes a weakness if (men) admit they need friendship.

Men who were more emotionally restricted, power-focused, and scored high on surveys measuring homophobia were less likely to have intimate and close friendships.

And the desire to toughen up and never show weakness that limits men from friendship can lead them to loneliness, violence and anger.

If we raise children to go against their nature, we shouldn't be surprised if some of those children grow up to fight.

Latest/ The US military shoots down China's spy balloon

What's cool on Netflix in February

This is the best way to cancel plans with friends

The EU limits the price of Russian oil products

Complications during pregnancy are linked to a higher risk of heart disease, study finds

Some tips and tricks for couples who fight a lot

Oil and gasoline are reduced again, gas is increased

A suspected Chinese spy balloon is identified over the US! How does Beijing respond to this event?

Snowfall in the country! Be careful in mountainous areas

Three new buildings in the Student City, Veliaj: We will transform it into a university campus

Cameron admits after 25 years: Jack could have escaped with Rose

The "Martyrs of February 4" street is back in Tirana

Barely prolonging his career, Tom Brady lost his marriage but also some of his brilliance

Some good events that happened this week on the environment, biodiversity and rights

There are 5 expectations from this year!

Famous bloggers: 5 cities that will make you feel like you're in a fairytale in Europe. Inside such an Albanian city

The frosty weather starts this weekend

Horoscope for February 4 by Russell Grant

This year, the "Dritero Agolli" museum is added to Tirana

Celibashi: The ballot will be simpler than in the 2019 elections

The attack on globalization is a mistake!

Fabrication of dirt of the opposition! Rama responds to the attacks after the NY Times article

The famous designer, Paco Rabanne, passes away at the age of 88

The price of oil and gasoline decreases, gas increases

What the NY Times Says About the McGonical Case

Why rejection is the secret to success

Photos/ What will the square look like near Kukes Airport

The European summit is held in Kiev, while the bomb alarm goes off

The reason why we buy, buy, buy

Race for the Municipality/ Dalipi: Veliaj has not divided the citizens into left and right, he has made decisions for the unrepresented part as well

Korça, Dibra, Kukësi are covered by snow. How is the situation with roads and electricity?

The three judges running for the presidency of the Constitutional Court

A Chinese balloon is spying on American soil

25 lines for these holidays

What's cool on Netflix in February

This is the best way to cancel plans with friends

Complications during pregnancy are linked to a higher risk of heart disease, study finds

Barely prolonging his career, Tom Brady lost his marriage but also some of his brilliance

Horoscope for February 4 by Russell Grant

Horoscope for February 3 by Russell Grant

Horoscope for February 2 by Russell Grant