More at the Theater 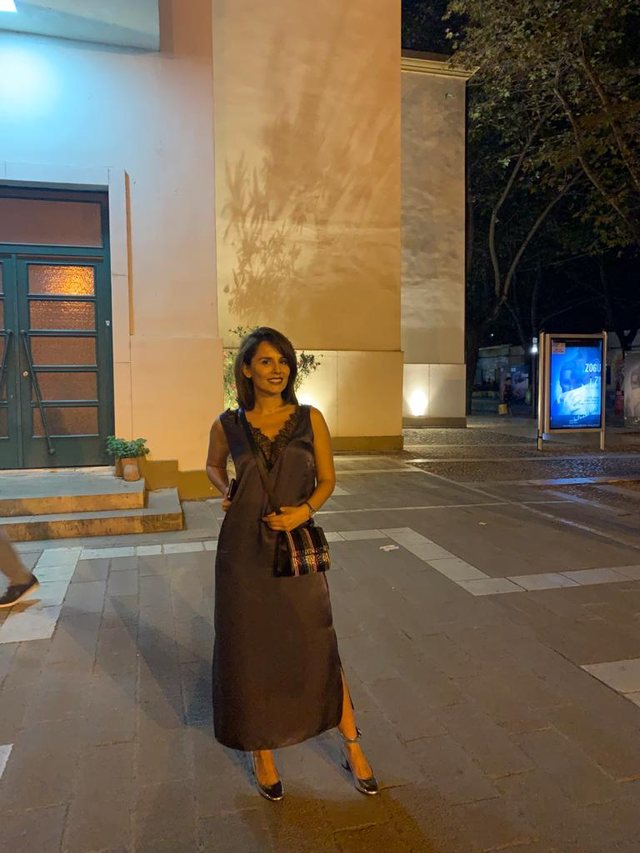 I came to Tirana, it is known. Some even accuse me of this: "She from the villages of Burrel." Yes, I am from the village of Ahmet Zogu and we must have some connection, at least in terms of stubbornness. I also like his figure and the fact that he responded to the enemies with merit! As I am sorry that history went against him and Albania was subjected to its historical fate as well as the rest of the east.

It occurs to me to imagine the fate of this monarchical country with a view from the west and Europe, but as they say there from the village, there is no crying about the kismet.

I came to Tirana when I was 18 years old. This was part of a dialogue with a girl on Tiranapost's Instagram. He was one of many young people grieved by the demolition of the theater. It?s a mixed feeling, but it seems to me a wonderful thing that young people have this approach to the need for memory, for nostalgia. Remaining human in a society that escapes little by little is impressive.

I often talk to some of them and I have some favorites. I even spotted the next prime minister. She is a 24 carat Democrat and the most intelligent girl I have ever spoken to.

On Sunday, when I saw the video of the demolition of the National Theater, at seven-thirty in the morning, I was numb. Not that I liked the building, but when I saw it on the ground floor, I felt sorry for it. The first for myself: The first years of journalism appeared to me, when I briefly became the culture reporter, on TV Klan. I really liked it when I went, watched the show and finally made a chronicle that was always given at the end of the news edition and I was the last one to finish the job. It was a dimension of theater freedom, not the end, not the buildings, but the "vibe" there all the people I saw and it seemed freer to me the crazier, the more pet.

Second: No one can applaud for turning off a spiritual art address today, even if time will tell it was right. That a more beautiful building is coming etc. etc. We don't know that! Eiffel died in Paris without knowing that he would have all the love in the world. Theater as a building and as Memory are two different things. Like Theater as a political behavior and power are two very important factors for which I have one answer at the end.

When the theater is built we will see them all taking pictures with the young man. Forgive me for the insensitivity, but it?s like a virus.

If young people in the square had protested without party orders, those I read up and down, I believe the majority would have screamed. What happened to the theater will be judged by vote and time. But I believe this act will have the power to make a split. This ?death? can give birth to a new one. This degradation can lead to reflection. Maybe ?!

I do not think that an old building was the Homeland, but that everything in this city is the Homeland. Ask yourself: Why are we talking only now and only about the theater?

We people who live and work, are not to be protected ?! Young people who are defending themselves with your insensitivity, ours and ours, we as a society where are we going? Aren't we, our upbringing, education, thought, the language we use, a reflection of the Homeland? All against all is the jungle, not society. Have we seen parliament? Do we see how elections are conducted? Do we see them twisting here and there and having a beautiful name 'allies'. Do you see what happens online ?! Have you seen the phone today ?!

We have not talked about other memory assets as well, and honestly beautiful endlessly beautiful in this city / Homeland.

For example, when I was 18, there were more Tirana houses and neighborhoods. And I live to this day in such a typical. Forgive my beloved north or salty south, not like Tirona. They are so good and good-natured. When I was little I dreamed of houses with oranges and jasmine and in my neighborhood there are still.

Every day I see two former villas, one a toptanase, but watch cases are. I won't see them again. They are being replaced by mansions. Nobody talks! It seems to me that Exit.al had such an article and the villas in my neighborhood are fixed.

How many of them have turned into mansions and how many are returning. How many have returned to shopping malls and how many will return. The city has long been another city and along with the long palaces, the spacious shopping malls, the tight insensitivity is coming!

Homeland has long been different. They are killing those who speak on his behalf and are closing their mouths insensitively. "Today no one has a right," the inbox girl told me, who was so sad. "So I can't go out to protest. I'm not a sheep to go out there. But it's painful that they're doing this to us."

I think she was right!

-Come on, I know what this job is like! If we had protested in time for the degradation of political parties, dialogue, arrogance within them. If we had more than civil society, civic ideas, more people talking and not shouting, working and not twisting, today they would be more at the theater!